Provocation to create another riot 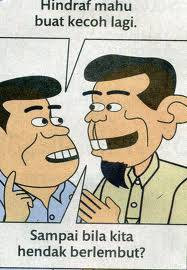 Report lodged over attack at ABU talk
KUALA LUMPUR (Jan 24, 2012): The Anything But Umno (ABU) movement lodged a police report today over an atack by a group of youth during a talk in Klang on Saturday.
The attack occured at the Shah Alam City Council hall at Jalan Kebun leaving a 33-year-old member of the Hindu Rights Action Force (Hindraf) badly injured. Hindraf was the co-organiser of the event.
The attack was also captured on video by those present.
Solidariti Anak Muda Malaysia chief Badrul Hisham Shaharin, lodged the police report at noon at the Dang Wangi police station here.
He told reporters later that the police should investigate the incident and determine who were the culprits behind the attack.
Badrul Hisham, who is better known as Chegubard said members of the movement had spotted several of the attackers having a friendly chat with the police after the incident.
He claimed he had information that those behind the violence were Umno members.
"We are lodging the police report here because we have lost faith in Klang police who appeared to have done nothing to nab the attackers. We are confident the higher level in the police will look into this matter seriously. We are also taking this up with Suhakam today," he said.
Hindraf national coordinator W.Sambulingam said he was not shocked by the attack as his group had constantly faced such aggression from uniformed or plainclothes police personnel and other agent provocateurs.
"The video footages are evidence and the people can determine for themselves who are the aggressors when we hold such talks and gatherings. We do not condone violence." he added
Also present at the police station was ABU coordinator Haris Ibrahim and PSM secretary- general S Arutchelvan.
It is learnt that the report lodged by Badrul will be handed over to Selangor police for investigations.

From The Sun Daily
The truth behind the story is that there was a provocation from Hindraf members during Maghrib prayers time where they were on purpose were making lots of noises and were flying Hindraf's flag.
This is actually just a challenge by Badrul Hisham who may have mala fide towards the police to bad mouth the police when he in a matter of fact was instigating the Hindraf members to provoke the kampung folks so that there will be a racial clash there.
Malaysia is an Islamic country not an Indian country so if you want to make a ruckus whenever the hell that you want, I suggest you get out of Malaysia and go back to INDIA.
We are better off without the KELINGS here making noises whenever you have your own festivities. Can you be like the Indians in India where they kill each other? It's better if you KELINGs kill each other.
In fact, we Muslims never make any ruckus during any Indian festivities so just respect as as we had done so to you.
Unless, if you think you want to die, just do it. We the Malays have been patient for a long time.
I hate KELING. Can you KELING just go back to the hell hole where you came from if you are determine to create chaos in this country?
KELING are so great that they will fuck their own mother and daughter and can cause accident by just walking instead of driving. Go and drink some todi and stay drunk. That is the best advice that I can give to the KELINGs.
Posted by Wake UP! at 9:33 PM