Choose a route and we will follow, Bersih tells IGP

KUALA LUMPUR, June 30 — Bersih has asked the police to suggest a route for its July 9 march to ensure that the rally goes off without a hitch, in what appears to be an attempt to bridge the growing divide between both parties.

Bersih chairman Datuk Ambiga Sreenevasan said the election watchdog presented the suggestion to the Inspector-General of Police (IGP) in the hopes that he would be open-minded and work with Bersih.

“We have asked them, the police, now you choose from one point in Kuala Lumpur to Taman Jaya, whatever,” she told reporters outside Bukit Aman police headquarters here after meeting with IGP Tan Sri Ismail Omar.

“You choose what route, we will follow. And we will do it peacefully.”

The police were required by law to protect any party wanting to hold an assembly and could arrest those who refused to gather in peaceful fashion, she pointed out.

Ambiga revealed that Ismail did not respond to the request during the “very friendly” meeting but stressed that she remained “ever hopeful” Bersih will get a positive answer from him next week.

“This will go on with police help. That is what I’m positive about... And I’m going to remain positive because that’s best for everybody,” she said.

Ambiga declined to comment on Bersih’s next course of action if the IGP remained steadfast in his refusal to let the rally take place, saying she would cross that bridge when she came to it.

Bersih will take to the streets of Kuala Lumpur on July 9 to demand free and fair elections.

The government, however, insists that elections are already free and fair, citing the opposition’s historic gains in Election 2008.

Pakatan Rakyat (PR) hopes the demonstration will generate momentum ahead of a general election expected within a year.

The first Bersih rally in 2007 saw up to 50,000 people take to the streets of Kuala Lumpur before being dispersed by police armed with tear gas and water cannon.

The demonstration has been partly credited for PR’s record gains in the 2008 general election, which saw the opposition pact swept to power in five states and won 82 parliamentary seats.

The police, however, have alleged that the Bersih 2.0 rally is being masterminded by foreign parties who wish to see chaos in the country and have promised to crack down on Bersih supporters if they go ahead with the march.

Taken from The Malaysian Insider 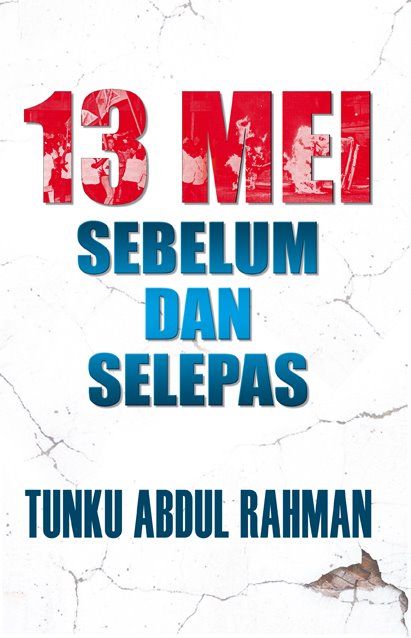 A must read book by the new generation
Everyone especially the younger generation should read the book "13 Mei Sebelum Dan Selepas" which had been written by our former Prime Minister Tunku Abdul Rahman.

Those who cannot remember the past are condemned to repeat it. - George Santayana

This famous statement has produced many paraphrases and variants. Those who cannot learn from history are doomed to repeat it.

In fact, the Education Ministry and the Ministry of Higher Education should make this book something compulsory to be read by the students because they are plain ignorant of the dark history of our country.

In the book, I noticed that what had been done by the ultra kiasus is being repeated here where they asked for a route which will be approved by the police, but then on that day itself, will not follow what had been approved in the first place.

I can bet my soul to the devil that the same modus-operandi is being copy cat here where they will act like a wide-eyed innocent virgin and will act like a total a$$h0le when that day comes.

Can we trust those responsible for the losses suffered by the city during the 1st Bersih rally in 2007 not to repeat their rowdy acts this coming 9th July?

What action should be taken by the authorities and the businessmen/businesswomen who suffered losses on that day if the same thing occured? Are the organizers going to pay for the losses endured by them?

Those motherf***ers should be imprisoned for causing both the government and the public to experience losses.

KUALA LUMPUR, June 29 – Sociologists and political scientists are worried that the illegal assembly planned for July 9 can set off a chaotic situation especially with the manipulation of third parties.

“The organisers might say the assembly will be peaceful, but one individual is all it takes to cause mob behaviour,” said social scientist Prof Dr Ahmad Atory Hussain of Universiti Sains Malaysia.

“If the assembly is to go ahead, there may be disturbances, clashes between communities or among the Malays because of political differences,” he said.

If the assembly were to be big, the chance of disturbances would be greater, he added.

Ahmad Atory also did not rule out the possibility of third party manipulation.

“I see the assembly is meant to provoke. It is also to build up anti-government sentiment among voters for the coming general election,” he said.

He said the assembly could only cause hardship to the people, particularly stall keepers and traders.

A senior lecturer at Universiti Kebangsaan Malaysia, Abd Ghapa Harun, said the organisers should be held responsible for anything disastrous that happened at the assembly.

'Mala fide' is defined by the legal dictionary as the fraudulent deception of another person; the intentional or malicious refusal to perform some duty or contractual obligation.

Hence, the Bersih illegal rally which has an ulterior motive to create chaos, political and economical instability in Malaysia has 'mala fide' against Malaysia and its people.

There are alleged attempts by Bersih activicts to revive communism and the police are investigating 30 Parti Sosialis Malaysia (PSM) members including Sungai Siput MP, Dr Michael Jayakumar for "waging war against the Yang DiPertuan Agong."

"The only pictures on the Bersih T-shirts were Bersih 2 on the front and Bersih's eight demands for clean polls at the back. There is a possibility some of our members may have brought T-shirts with the images of Chin Peng and Rashid Maidin for their own use. Such T-shirts are on sale in KL and our members might have been carrying these or coincidentally wearing them when they were arrested," said PSM chairman Dr Nasir Hashim, who is also the Kota Damansara assemblyman.

In addition to that, AIDC had revealed that CIA is using the democratic mask by using the NGO that is linked to them.

Try to Google or find out about Chin Peng and Rashid Maidin and the wikipedia will describe them as having close ties to the Malayan Communist Party (MCP) whereby Chin Peng was the long time leader for MCP.

If the PSM members are not trying to revive communism, then what the hell are they doing with the images od Chin Peng and Rashid Maidin? The reality is that we know that nobody will ever admit to whatever mistakes that they made or whatever crime that they committed. And that is a fact!

Read more about what Bersih is really all about that had been divulged by Another Brick In The Wall here and here.