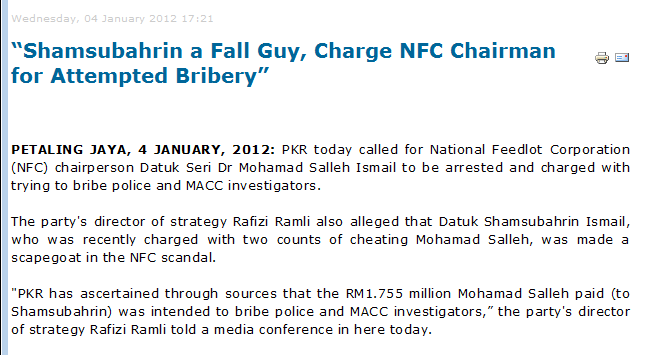 PETALING JAYA: The National Feedlot Corporation (NFCorp) has denied purchasing eight commercial properties in Bang-sar using a government soft loan as leverage.
In a two-paragraph statement, the company denied the allegations which were raised by the Opposition.
PKR director of strategy Rafizi Ramli had claimed that NFCorp executive chairman Datuk Seri Dr Mohamad Salleh Ismail had used the funds to obtain loans for eight shoplot units in the new KL Eco City development in Jalan Bangsar.
In a press conference on Wednesday, Rafizi claimed that the shoplot units were worth a forced-sale value of RM9.69mil.
Women, Family and Com-munity Development Minister Datuk Seri Shahrizat Abdul Jalil, who is Dr Mohamad Salleh’s wife, had stated that she was not involved in the KL Eco City project.
NFCorp has been embroiled in controversy after it was revealed that a RM250mil soft loan given by the Government for a national cattle-rearing project was used for unrelated activities.
The Star, 9 March 2012

I am sure that there is a mala fide in the premature accusations on the part of Rafizi, the PKR director of strategy who surely will find nothing good about what is being done by either the government or anyone who succeeded in getting the government project in an effort to produce local 'halal' beef for the 'halal hub' for both the local and international market.
Surely what is being done by National Feedlot Corporation (NFCorp) is threatening to both the non-Bumiputera and the overseas beef supplier who might see a drastic decrease of number of beef marketed by them if NFCorp could be able to produce 'halal' beef by the Bumiputera farmers since what NFCorp is doing is suppossedly to help the Bumiputera farmers by providing them the facilities to do that in the future.
Some quarters namely the non-Bumiputera and the foreign supplier from overseas are becoming agitated by the presence of NFCorp which had gotten their contract from our Ministry of Agriculture.
Hence, if NFCorp were to fail in their bid to uphold the true mission and vision of the establishment of NFCorp which is to To Lead, Structure, and Transform The Malaysian Cattle Industry Into A World Class Halal Beef Producer, the facilities of the farm and the abattoir will be handed over with much ease to those who have self-interest to see this project fail which could mean they could get the facilities freely without having to spend any cent.
I am sure that some quarters that have some secret liasson with Anwar Ibrahim would be so happy to see this project fail because if it fails, this could mean they could be getting a jackpot from the remaining facilities which could be given to someone else and this could mean another big chuck of commission which could be given to them by whoever is lucky enough to get the facilities if NFCorp were suddenly to be pronounced bancrupt from this fiasco which had been created not in a good intention.
The question I would like to pose is that from whom did Rafizi received his information because the police who is currently investigating this case and the MACC should called the person who had given him that information to ensure that the information is not being made up like some science fiction story just to put NFCorp in the spotlight.
Posted by Wake UP! at 9:00 PM 1 comment:

An eye for an eye

Teacher gets 18 years' jail for pupil's death
ALOR STAR: A religious teacher was sentenced to 18 years' jail after he pleaded guilty to culpable homicide not amounting to murder of a 7-year-old pupil last year.
High Court Judicial Commissioner Mohd Zaki Abdul Wahab ordered the sentence against Hanif Mohd Ali, 28, to begin from the day he was detained.
Hanif, who was also a hostel warden, was initially charged under Section 302 of the Penal Code for murdering Saiful Syazani Saiful Sopfidee at the hostel of Sekolah Rendah Islam Al Furqan in Jejawi, Perlis, between 6pm and midnight on March 31, 2011.
Mohd Zaki reduced the charge to Section 304 (a) of the Penal Code for the same offence on Tuesday after he found that the prosecution had failed to establish a prima facie case against the accused under Section 302.
While entering his defence, Hanif pleaded guilty to the lesser charge which provided for a maximum 30 years' jail term upon conviction.
A post-mortem conducted on the victim showed that Saiful Syazani had succumbed to oxygen deficiency to the brain from intense compression to the neck.
A total of 25 witnesses were called to testify.
Deputy public prosecutors Noorin Badaruddin and Nadia Hanim Mohd Tajuddin prosecuted.
Counsels Ariff Azami Hussein, Azizul Shariman Mat Yusoff, Zulmi Sabri and Mohd Fikri Abdul Rahman appeared for Hanif.
New Straits Times, 7 March 2012 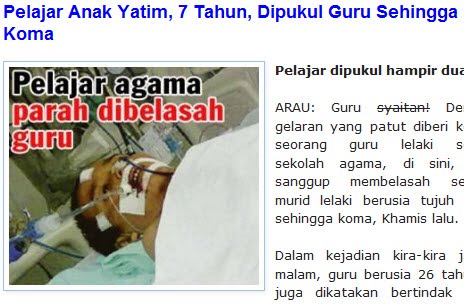 A teacher should controlled their emotions when dealing with school children who might not be as matured as they are.
And even though Saiful Syazani Saiful Sopfidee had been accused of stealing money from his classmates, the teacher should have INVESTIGATED the claims thoroughly by calling both sides, namely the accused and the accuser to get the real story since there is always two sides of the coins.
Moreover, the teacher should have been more responsible and called both families of the accused and the accuser to prevent this from occuring.
Therefore, the lame defence by Dari Sungai Derhaka is questionable because there are other civilised ways to settle this matter rather than tying up and beating up this 7-year-old pupil.
I am sure that maybe this teacher Hanif Mohd Ali does not acquire the proper teaching training or qualifications because surely a teacher should also be well-informed on how to investigate this thing without following his emotion but rather by using a disciplined method rather than resorting to tying up or beating the child senseless.
In Islam, if PAS really does want to implement HUDUD, surely you know there is this thing called an eye for an eye.
A life for another lost life! Anyone who kills should be punished by killing as well.
I am a bit perplexed at why criminals will want to cover up their faces after their sentences have been read out or when they are being brought out from the court.
If you are that bold enough to commit the crime without thinking first, why should you be ashamed of what you have done?
LET US ALL SEE YOUR HATEFUL FACE AND SEE WHAT YOU LOOK LIKE!
Posted by Wake UP! at 2:23 PM No comments: